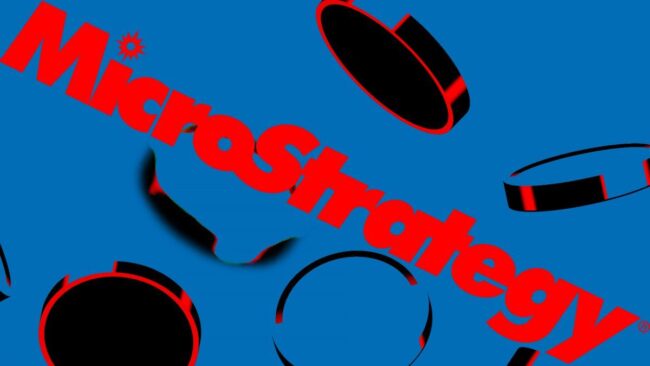 The Nasdaq-listed company is currently sitting on a paper loss of $330 million.

MicroStrategy’s massive bet on bitcoin is in the red after the cryptocurrency’s price fell below the software company’s average purchase price.

MicroStrategy and its entities currently hold 129,218 bitcoins, bought at an average price of $30,700. The current bitcoin price is around $28,200, which translates to a paper loss of $330 million — although MicroStrategy hasn’t realized the loss by selling any bitcoin.

Amid broader market fallout, MicroStrategy’s stock price has also declined sharply over the past few days. It closed at $168 on Wednesday, bringing the decline this week to 45%.

Microstrategy and its CEO Michael Saylor have become poster children for bitcoin enthusiasm after going all in on the cryptocurrency. MicroStrategy first purchased bitcoin on its balance sheet in August 2020, when Saylor told The Block that bitcoin is a superior asset for a treasury given it is deflationary by design.

“Gold is defective in the 21st century,” he said at the time. “It boils down to a very simple principle. It’s going to debase between 2% and 4% a year, certainly over the next hundred years.” As for the dollar, Saylor said, the problem is monetary policy expansion and inflation — which comes at the cost of purchasing power.

Saylor has since maintained his bullish stance on bitcoin. For instance, he recently tweeted: “One thing matters more than the rest. #Bitcoin.”

MicroStrategy has also often said that it will continue to buy bitcoin irrespective of its price moves since it has a long-term bet on the cryptocurrency. Saylor told The Block in an interview late last year that the company has two strategies: the first is to grow its business software business and the second is to “invest our excess cash flows in bitcoin, and we hold it for the long term.”

Notably, MicroStrategy’s bitcoin bets have been funded by more than $2 billion of debt. The company has taken several convertible and secured loans to buy the cryptocurrency.

Most recently, MicroStrategy’s subsidiary MacroStrategy, which holds most of its bitcoins, took a bitcoin-collateralized term loan of $205 million from Silvergate Bank for purposes including buying bitcoin.

Saylor doesn’t seem to be concerned with bitcoin’s price drop. He tweeted earlier this week that MicroStrategy has 115,109 BTC that it can pledge, and even if the price of bitcoin falls below $3,562, the company “could post some other collateral.”

MicroStrategy is not the only company with bitcoin losses on paper.

The Block contacted Saylor for comment but had not heard back by press time.